In this first part of this two-post series, I looked at how “a male” and “a female” were used on Twitter. I found that one part of speech tagger tagged “male” as a proper noun really frequently (which is weird, cause it isn’t one) and that overall the phrase “a female” was waaaay more frequent. Which is  interesting in itself, since my initial question was “are these terms used differently?” and these findings suggest that they are. But the second question is how are these terms used differently? To answer this, we’ll need to get a little more qualitative with it.

Using the same set of tweets that I collected last time, I randomly selected 100 tweets each from the “a male” and “a female” dataset. Then I hand tagged each subset of tweets for two things: the topic of the tweet (who or what was being referred to as “male” or “female”) and the part of speech of “male”  or “female”.

Who or what is being called “male” or “female”? 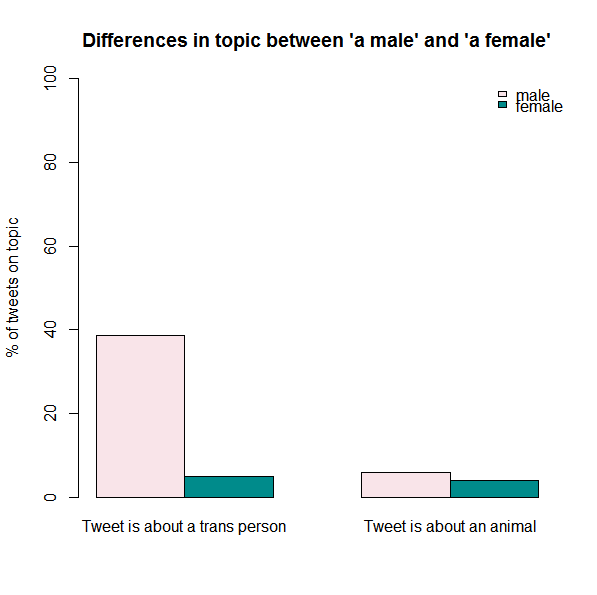 Because there were so few tweets to analyze, I could do a content analysis. This is a methodology that is really useful when you don’t know for sure ahead of time what types of categories you’re going to see in your data. It’s like clustering that a human does.

Going into this analysis, I thought that there might be a difference between these datasets in terms of how often each term was used to refer to an animal, so I tagged tweets for that. But as I went through the tweets, I was floored by the really high number of tweets talking about trans people, especially Mack Beggs, a trans man from Texas who was forced to wrestle in the women’s division. Trans men were referred to as “a male” really, really often. While there wasn’t a reliable difference between how often “a female” and “a male” was used to refer to animals or humans, there was a huge difference in terms of how often they were  used to refer to trans people. “A male” was significantly more likely to be used to describe a trans person than “a female” (X2 (2, N = 200) = 55.33, p <.001.)

Since the part of speech taggers I used for the first half of my analysis gave me really mixed results, I also hand tagged the part of speech of “male” or “female” in my samples. In line with my predictions during data collection, the only parts of speech I saw were nouns and adjectives.

And there was a huge difference there. A large majority of tweets with “a male” and talking about a trans person used “male” as a noun. In fact, more than a third of my subsample of tweets using “a male” were using it as a noun to talk about someone who was trans.

So what’s going on here? This construction (using “male” or “female” as a noun to refer to a human) is used more often to talk about:

These both make sense if you consider the cultural tendency to think about cis men as, in some sense, the “default”. (Deborah Tannen has a really good discussion of this her article “Marked Women, Unmarked Men“. “Marked” is a linguistics term which gets used in a lot of ways, but generally means something like “not the default” or “the weird one”.) So people seem to be more likely to talk about a person being “a male” or “a female” when they’re talking about anyone but a cis man.

A note on African American English

I should note that many of the tweets in my sample were African American English, which is not surprising given the large Black community on Twitter, and that use of “female” as a noun is a feature of this variety.  However, the parallel term used to refer to men in this variety is not “a man” or even “a male”, but rather “nigga”, with that spelling. This is similar to “dude” or “guy”: a nonspecific term for any man, regardless of race, as discussed at length by Rachel Jeantal here. You can see an example of this usage in speech above (as seen in the Netflix show “The Unbreakable Kimmy Schmidt“) or in this vine. (I will note, however, that it only has this connotation if used by a speaker of African American English. Borrowing it into another variety, especially if the speaker is white, will change the meaning.)

Now, I’m not a native user of African American English, so I don’t have strong intuitions about the connotation of this usage. Taylor Amari Little (who you may know from her TEDx talk on Revolutionary Self-Produced Justice) is, though, and tweeted this (quoted with permission):

And this does square with my own intuitions: there’s something slightly sinister about someone who refers to women exclusively as “females”. As journalist Vonny Moyes pointed out in her recent coverage of ads offering women free rent in exchange for sexual favors, they almost refer to women as “girls or females – rarely ever women“. Personally, I find that very good motivation not to use “a male” or “a female” to talk about any human.