Happy New Year’s Eve! Have you made any resolutions? Perhaps a resolution to learn something new in the new year? If so, you’re in luck! I’ve recently run across a number of different Netflix documentaries that touch on differents aspects of acoustics that readers of this blog might enjoy. (Yes, I’ve spent a lot of my winter break watching documentaries. Why do you ask?)

Do you know of any other good documentaries about linguistics or acoustics? Leave a comment and let me know!

So a while ago I got into a discussion with someone on Twitter about whether emojis have syntax. Their original question was this:

As someone who’s studied sign language, my immediate thought was “Of course there’s a directionality to emoji: they encode the spatial relationships of the scene.” This is just fancy linguist talk for: “if there’s a dog eating a hot-dog, and the dog is on the right, you’re going to use 🌭🐕, not 🐕🌭.” But the more I thought about it, the more I began to think that maybe it would be better not to rely on my intuitions in this case. First, because I know American Sign Language and that might be influencing me and, second, because I am pretty gosh-darn dyslexic and I can’t promise that my really excellent ability to flip adjacent characters doesn’t extend to emoji.

So, like any good behavioral scientist, I ran a little experiment. I wanted to know two things.

As it turned out, the answers to these questions are actually fairly intertwined, and related to a third thing I hadn’t actually considered while I was putting together my stimuli (but probably should have): whether there was an agent-patient relationship in the photo.

Agent: The entity in a sentence that’s affecting a changed, the “doer” of the action.

Patient: The entity that’s being changed, the “receiver” of the action.

To get data, I showed people three pictures and asked them to “pick the emoji sequence that best describes the scene” and then gave them two options that used different orders of the same emoji. Then, once they were done with the emoji part, I asked them to “please type a short sentence to describe each scene”. For all the language data, I just went through and quickly coded the order that the same concepts as were encoded in the emoji showed up.

So this gave me two parallel data sets: one with emojis and one with language data.

All together, 133 people filled out the emoji half and 127 people did the whole thing, mostly in English (I had one person respond in Spanish and I went ahead and included it). I have absolutely no demographics on my participants, and that’s by design; since I didn’t go through the Institutional Review Board it would actually be unethical for me to collect data about people themselves rather than just general information on language use. (If you want to get into the nitty-gritty this is a really good discussion of different types of on-line research.)

Picture one – A man counting money 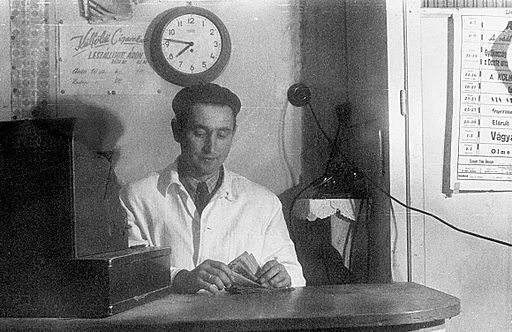 I picked this photo as sort of a sanity-check: there’s no obvious right-to-left ordering of the man and the money, and there’s one pretty clear way of describing what’s going on in this scene. There’s an agent (the man) and a patient (the money), and since we tend to describe things as agent first, patient second I expected people to pretty much all do the same thing with this picture. (Side note: I know I’ve read a paper about the cross-linguistic tendency for syntactic structures where the agent comes first, but I can’t find it and I don’t remember who it’s by. Please let me know if you’ve got an idea what it could be in the comments–it’s driving me nuts!)

And they did! Pretty much everyone described this picture by putting the man before the money, both with emoji and words. This tells us that, when there’s no information about orientation you need to encode (e.g. what’s on the right or left), people do tend to use emoji in the same order as they would the equivalent words.

Picture two – A man walking by a castle 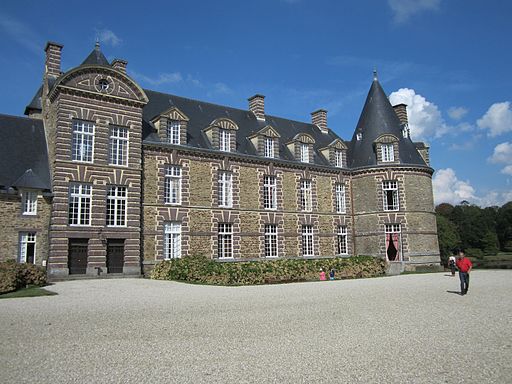 But now things get a little more complex. What if there isn’t a strong agent-patient relationship and there is a strong orientation in the photo? Here, a man in a red shirt is walking by a castle, but he shows up on the right side of the photo. Will people be more likely to describe this scene with emoji in a way that encodes the relationship of the objects in the photo?

I found that they were–almost four out of five participants described this scene by using the emoji sequence “castle man”, rather than “man castle”. This is particularly striking because, in the sentence writing part of the experiment, most people (over 56%) wrote a sentence where “man/dude/person etc.” showed up before “castle/mansion/chateau etc.”.

So while people can use emoji to encode syntax, they’re also using them to encode spatial information about the scene. 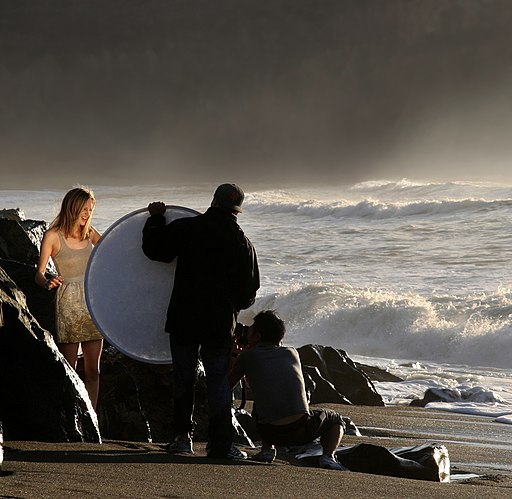 Ok, so let’s add a third layer of complexity: what about when spatial information and the syntactic agent/patient relationships are pointing in opposite directions? For the scene above, if you’re encoding the spatial information then you should use an emoji ordering like “woman camera man”, but if you’re encoding an agent-patient relationship then, as we saw in the picture of the man counting money, you’ll probably want to put the agent first: “man camera woman”.

(I leave it open for discussion whether the camera emoji here is representing a physical camera or a verb like “photograph”.)

So people were a little more divided here. It wasn’t quite a 50-50 split, but it really does look like you can go either way with this one. The thing that jumped out at me, though, was how the word order and emoji order pattern together: if your sentence is something like “A man photographs a model”, then you are far more likely to use the “man camera woman” emoji ordering. On the other hand, if your sentence is something like “A woman being photographed by the sea” or “Photoshoot by the water”, then it’s more likely that your emoji ordering described the physical relation of the scene.

So what’s the big takeaway here? Well, one thing is that emoji don’t really have a fixed syntax in the same way language does. If they did, I’d expect that there would be a lot more agreement between people about the right way to represent a scene with emoji. There was a lot of variation.

On the other hand, emoji ordering isn’t just random either. It is encoding information, either about the syntactic/semantic relationship of the concepts or their physical location in space. The problem is that you really don’t have a way of knowing which one is which.