So I recently had a pretty disconcerting experience. It turns out that almost no one else has heard of a word that I thought was pretty common. And when I say “no one” I’m including dialectologists; it’s unattested in the Oxford English Dictionary and the Dictionary of American Regional English. Out of the twenty two people who responded to my Twitter poll (which was probably mostly other linguists, given my social networks) only one other person said they’d even heard the word and, as I later confirmed, it turned out to be one of my college friends.

So what is this mysterious word that has so far evaded academic inquiry? Ladies, gentlemen and all others, please allow me to introduce you to…

The word means something like “fool” or “incompetent person”. To prove that this is actually a real word that people other than me use, I’ve (very, very laboriously) found some examples from the internet. It shows up in the comments section of this news article:

THAT is why people are voting for Mr Trump, even if he does act sometimes like a Bumpus.

I also found it in a smattering of public tweets like this one:

If you ever meet my dad, please ask him what a “bumpus” is

Having seen horror of war, one would think, John McCain would run from war. No, he runs to war, to get us involved. What a bumpus.

And, my personal favorite, this one:

There’s also an Urban Dictionary entry which suggests the definition:

I’m a little sceptical about the last one, though. Partly because it doesn’t line up with my own intuitions (I feel like a bumpus is more likely to be silent than rowdy) and partly becuase less popular Urban Dictionary entries, especially for words that are also names, are super unreliable.

I also wrote to my parents (Hi mom! Hi dad!) and asked them if they’d used the word growing up, in what contexts, and who they’d learned it from. My dad confirmed that he’d heard it growing up (mom hadn’t) and had a suggestion for where it might have come from:

I am pretty sure my dad used it – invariably in one of the two phrases [“don’t be a bumpus” or “don’t stand there like a bumpus”]….  Bumpass, Virginia is in Lousia County …. Growing up in Norfolk, it could have held connotations of really rural Virginia, maybe, for Dad.

While this is definitely a possibility, I don’t know that it’s definitely the origin of the word. Bumpass, Virginia, like  Bumpass Hell (see this review, which also includes the phrase “Don’t be a bumpass”), was named for an early settler. Interestingly, the college friend mentioned earlier is also from the Tidewater region of Virginia, which leads me to think that the word may have originated there.

My mom offered some other possible origins, that the term might be related to “country bumpkin” or “bump on a log”. I think the latter is especially interesting, given that “bump on a log” and “bumpus” show up in exactly the same phrase: standing/sitting there like a _______.

She also suggested it might be related to “bumpkis” or “bupkis”. This is a possibility, especially since that word is definitely from Yiddish and Norfolk, VA does have a history of Jewish settlement and Yiddish speakers.

A usage of “Bumpus” which seems to be the most common is in phrases like “Bumpus dog” or “Bumpus hound”. I think that this is probably actually a different use, though, and a direct reference to a scene from the movie A Christmas Story:

One final note is that there was a baseball pitcher in the late 1890’s who went by the nickname “Bumpus”: Bumpus Jones. While I can’t find any information about where the nickname came from, this post suggests that his family was from Virginia and that he had Powhatan ancestry.

I’m really interesting in learning more about this word and its distribution. My intuition is that it’s mainly used by older, white speakers in the South, possibly centered around the Tidewater region of Virginia.

If you’ve heard of or used this word, please leave a comment or drop me a line letting me know 1) roughly how old you are, 2) where you grew up and 3) (if you can remember) where you learned it. Feel free to add any other information you feel might be relevant, too! 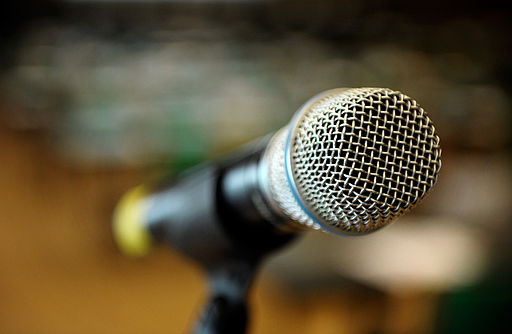 I got a cool question from Veronica the other day:

Which wavelength someone would use not to hear but feel it on the body as a vibration?

So this would depend on two things. The first is your hearing ability. If you’ve got no or limited hearing, most of your interaction with sound will be tactile. This is one of the reasons why many Deaf individuals enjoy going to concerts; if the sound is loud enough you’ll be able to feel it even if you can’t hear it. I’ve even heard stories about folks who will take balloons to concerts to feel the vibrations better. In this case, it doesn’t really depend on the pitch of the sound (how high or low it is), just the volume.

But let’s assume that you have typical hearing. In that case, the relationship between pitch, volume and whether you can hear or feel a sound is a little more complex. This is due to something called “frequency response”. Basically, the human ear is better tuned to hearing some pitches than others. We’re really sensitive to sounds in the upper ranges of human speech (roughly 2k to 4k Hz). (The lowest pitch in the vocal signal can actually be much lower [down to around 80 Hz for a really low male voice] but it’s less important to be able to hear it because that frequency is also reflected in harmonics up through the entire pitch range of the vocal signal. Most telephones only transmit signals between  300 Hz to 3400 Hz, for example, and it’s only really the cut-off at the upper end of the range that causes problems–like making it hard to tell the difference between “sh” and “s”.)

The takeaway from all this is that we’re not super good at hearing very low sounds. That means they can be very, very loud before we pick up on them. If the sound is low enough and loud enough, then the only way we’ll be able to sense it is by feeling it.

How low is low enough? Most people can’t really hear anything much below 20 Hz (like the lowest note on a really big organ). The older you are and the more you’ve been exposed to really loud noises in that range, like bass-heavy concerts or explosions, the less you’ll be able to pick up on those really low sounds.

What about volume? My guess for what would be “sufficiently loud”, in this case, is 120+ Db. 120 Db is as loud as a rock concert, and it’s possible, although difficult and expensive, to get out of a home speaker set-up. If you have a neighbor listening to really bass-y music or watching action movies with a lot of low, booming sound effects on really expensive speakers, it’s perfectly possible that you’d feel those vibrations rather than hearing them. Especially if there are walls between the speakers and you. While mid and high frequency sounds are pretty easy to muffle, low-frequency sounds are much more difficult to sound proof against.

Are there any health risks? The effects of exposure to these types of low-frequency noise is actually something of an active research question. (You may have heard about the “brown note“, for example.) You can find a review of some of that research here. One comforting note: if you are exposed to a very loud sound below the frequencies you can easily hear–even if it’s loud enough to cause permanent damage at much higher frequencies–it’s unlikely that you will suffer any permanent hearing loss. That doesn’t mean you shouldn’t ask your neighbor to turn down the volume, though; for their ears if not for yours!