So after my last blog post went up, a couple people wondered if the difference in classification error rates between men and women might be due to pitch, since men tend to have lower voices. I had no idea, so, being experimentally inclined, I decided to find out.

First, I found the longest list of words that I could from the accent tag. Pretty much every video I looked used a subset of these words.

Then I recorded myself reading them at a natural pace, with list intonation. In order to better match the speakers in the other Youtube videos, I didn’t go into the lab and break out the good microphones; I just grabbed my gaming headset and used that mic. Then, I used Praat (a free, open source software package for phonetics) to shift the pitch of the whole file up and down 60 Hertz in 20 Hertz intervals. That left me with seven total sound files: the original one, three files that were 20, 40 and 60 Hertz higher and finally three files that were 20, 40 and 60 Hertz lower. You can listen to all the files individually here.

Why did I do things this way?

You can check out how well the auto-captions did yourself by checking out this video. Make sure to hit the CC button in the lower left-hand corner.


The first thing I noticed was that I had really, really good results with the auto captions. Waaayyyy better than any of the other videos I looked at. There were nine errors across 434 tokens, for a total error rate of only 2%, which I’d call pretty much at ceiling. There was maaayybe a slight effect of the pitch manipulation, with higher pitches having slightly higher error rates, as you can see: 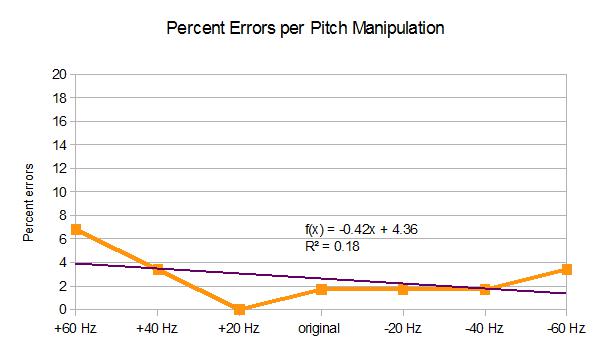 BUT there’s also sort of a u-shaped curve, which suggests to me that the recognizer is doing worse with the files that have been messed with the most. (Although, weirdly, only the file that had had its pitched shifted up by 20 Hz had no errors.) I’m going to go ahead and say that I’m not convinced that pitch is a determining factor

So why were these captions so much better than the ones I looked at in my last post? It could just be that I was talking very slowly and clearly. To check that out, I looked at autocaptions for the most recent video posted by someone who’s fairly similar to me in terms of social and vocal characteristics: a white woman who speaks standardized American English with Southern features. Ideally I’d match for socioeconomic class, education and rural/urban background as well, but those are harder to get information about.

I chose Bunny Meyer, who posts videos as Grav3yardgirl. In this video her speech style is fast and conversational, as you can hear for yourself:

To make sure I had roughly the same amount of data as I had before, I checked the captions for the first 445 words, which was about two minutes worth of video (you can check my work here). There was an overall error rate of approximately 8%, if you count skipped words as errors.  Which, considering that recognizing words in fast/connected speech is generally more error-prone, is pretty good. It’s definitely better than in the videos I analyzed for my last post. It’s also a fairly small difference from my careful speech: definitely less than the 13% difference I found for gender.

So it looks like neither the speed of speech nor the pitch are strongly affecting recognition rate (at least for videos captioned recently). There are a couple other things that I think may be going on here that I’m going to keep poking at: